So, within the last few weeks, for those of us who are passionate about YA and children's literature, the internet exploded.  A few times.

First, Shannon Hale started a conversation on Twitter and Tumblr about by discussing  some of her school visits and how some schools only dismissed the female students to see her speak.  As though only girls could benefit from hearing from her.   A summary of that discussion by School Library Journal can be found here.

Although I have read some of Shannon Hale's other books in the past, in light of all the discussion, I did use this as an excuse to finally pick up The Princess in Black.  I enjoyed this early chapter book. It's the story of Princess Magnolia, who despite her initial appearance of being the stereotypical princess in pink, must guard a secret from the Duchess Wigtower who has a taste for secrets.  Magnolia is also the Princess in Black, a hero who protects the realm from monsters.  While having tea with the Duchess, the princess is called away on one such mission to defeat a big blue monster.

I enjoyed The Princess in Black.  I think it does a marvelous job of challenging stereotypes within princess cultures.  I did, however, feel like the writing was weak.  It could have used some refining.

So, that was my initial plan for this blog post.  A simple book review.

Then, last night, Twitter started to respond to an interview on male societies that YA author Andrew Smith did.  Particularly, some people took issue with his reply to the question below:

"On the flip side, it sometimes seems like there isn't much of a way into your books for female readers. Where are all the women in your work? I was raised in a family with four boys, and I absolutely did not know anything about girls at all. I have a daughter now; she's 17. When she was born, that was the first girl I ever had in my life. I consider myself completely ignorant to all things woman and female. I'm trying to be better though.A lot of The Alex Crow is really about the failure of male societies. In all of the story threads, there are examples of male-dominated societies that make critical errors, whether it's the army that Ariel falls in with at the beginning, or the refugee camp, or Camp Merrie-Seymour for boys, or the doomed arctic expedition, they're all examples of male societies that think that they're doing some kind of noble mission, and they're failing miserably."

I highlighted the part that everyone is freaking out about.  The essence of the criticism that Smith had received is summed up well by Tessa Gratton on her tumblr.  She notes that despite Smith's impressive imagination, his comment implies that female experience is more foreign to him than the fantastic things he explores in his fiction.

What was I doing while all of this was going on?  Posting pictures of my cat, of course: 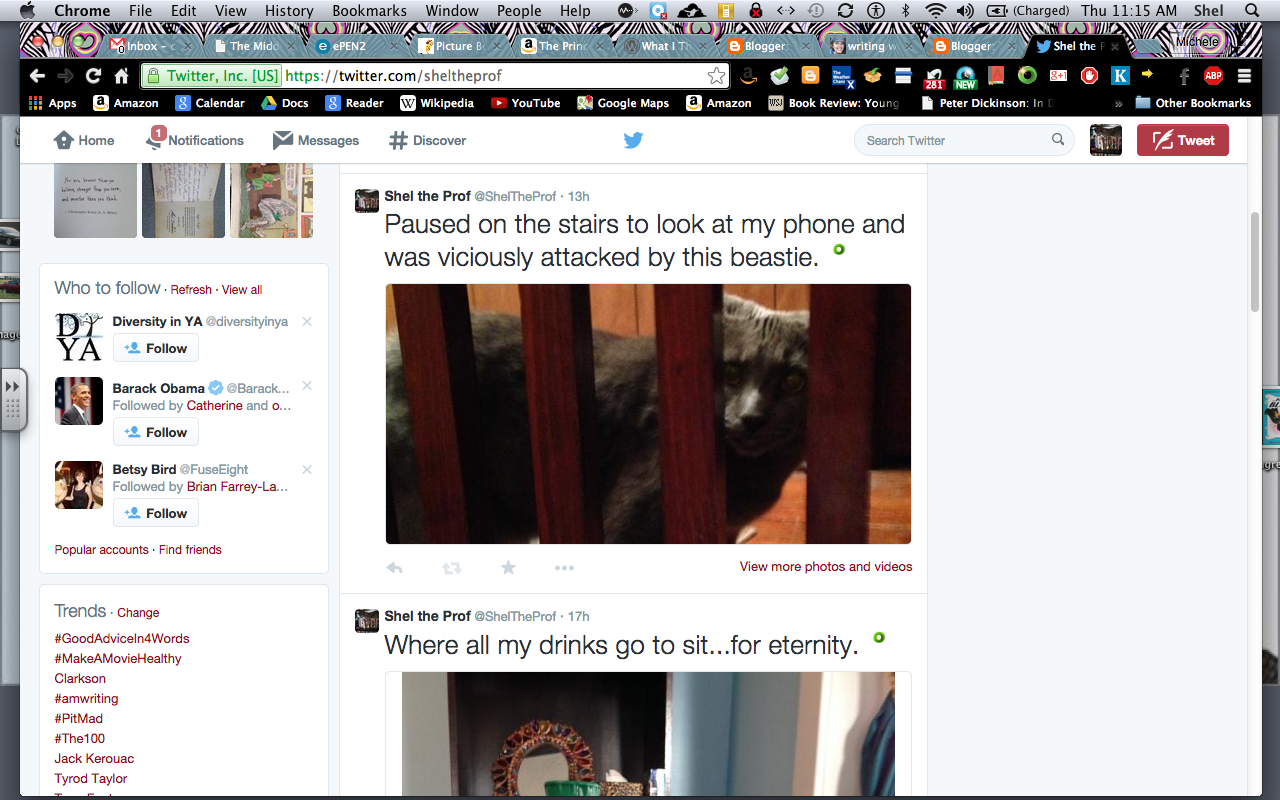 So, I plan to share about both of these issues with my multicultural literature class.  Instead of wading into the debate though, my hope is to focus on the following:

I show enough videos of John Green that a few of my students have accused me of being in love with him.  I must then remind those students that it is actually Markus Zusak who will always have my heart.

After showing this particular video, the conversation will most likely deteriorate into "in your pants" jokes.  But, I know my students will start to pay more attention to how gender is presented.

So, I'd like to leave you with one last quotation.  It was a bit of perfect timing that Andrew Solomon just happened to say what I think is the perfect comment for this situation in his New Yorker article, "The Middle of Things:  Advice for young writers":

"We have equal things to teach each other. Life is most transfixing when you are awake to diversity, not only of ethnicity, ability, gender, belief, and sexuality but also of age and experience. The worst mistake anyone can make is to perceive anyone else as lesser. The deeper you look into other souls—and writing is primarily an exercise in doing just that—the clearer people’s inherent dignity becomes. So I would like to be young again—for the obvious dermatological advantages, and because I would like to recapture who I was before the clutter of experience made me a bit more sagacious and exhausted. What I’d really like, in fact, is to be young and middle-aged, and perhaps even very old, all at the same time—and to be dark- and fair-skinned, deaf and hearing, gay and straight, male and female. I can’t do that in life, but I can do it in writing, and so can you. Never forget that the truest luxury is imagination, and that being a writer gives you the leeway to exploit all of the imagination’s curious intricacies, to be what you were, what you are, what you will be, and what everyone else is or was or will be, too."

Well, I'm off to try to live in someone else's perspective for a while.