REVIEW: Diary of a Wimpy Kid: The Ugly Truth 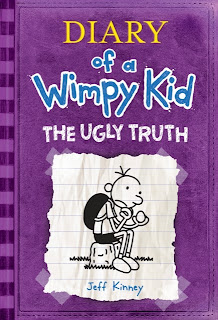 
Appetizer:  When I think about The Ugly Truth, the fifth installment in the Diary of a Wimpy Kid series, I'm probably just going to refer to it as "the puberty one."

Greg seemed more concerned with aging in this book, as he had to attend a sex-ed lesson in school, received a book on puberty and a stick of deodorant gift wrapped from his mother and his father pressured him to try to take on more responsibility.

The book begins with Rowley refusing to be Greg's friend (once again).  As to what they were fighting about I had no idea.  I probably would have looked it up in Dog Days, but that book was all the way over there in my office at school and I was reading The Ugly Truth all the way over here in my home.  So, I had to start out confused.  (Side note--I'm also too lazy to check my own review for Dog Days to see if I left any hints about what happened.  This is why I fail as a book blogger.)

Luckily, there was a lot of other stuff going on with Greg to keep me distracted:  Greg's mother has decided to go back to school, meaning Greg, his older brother, Rodrick, and his dad have to help around the house and that they have to hire a maid (who may not be doing the best job ever).

My favorite scene was where Greg's dad had to help him with his math homework instead of his mom: 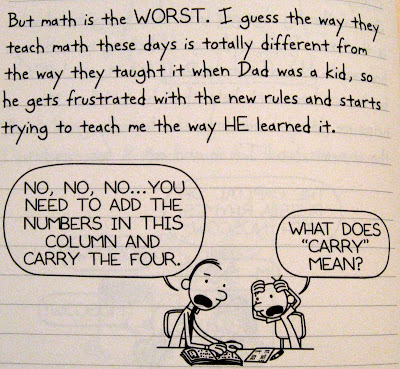 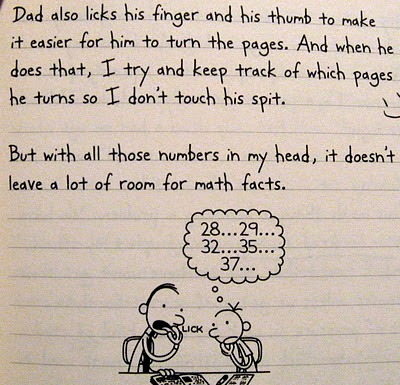 Greg also tries out for a role in an ice cream ad campaign, stays at a school overnight lock-in, have a role in a family wedding and receive "the talk" from his grandmother.

I enjoyed the book, but I have to say that my appreciation was back down to how I felt about the first two books.  Greg was still a selfish character (but I'm not holding my breath for that to change.  Besides, it's kind of nice to have a character who never learns his lesson).  The Ugly Truth also lacked the critiques of classic children's books and authors that I had found so hilarious in a couple of the past books.

Plus, I (again) had some trouble with the way gender was constructed.  When Greg's mom decided to go back to school, I was super excited.  But then Greg has a conversation with another student, Chirag Gupta, and there was kind of this expectation that it's better for a mom to stay at home (p. 120).  (Where are the stay-at-home dads?!)  Then, *spoiler* at the end of the book, after one semester Greg's mom decides to put "her academic career "on hold" for a while and spend more time with the family" (p. 214.). 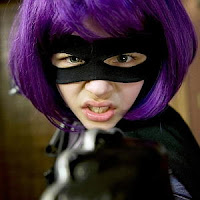 I know it's just one character.  But there's never really been much of the way of dynamic female characters in the series (which is why they had to awkwardly insert Chloe Moretz into the movie version after her success as Hit-Girl in the movie Kick-Ass.

If only she'd still been playing the same character.

"What's that, Greg?  Fregley is chasing you around his house, threatening to touch you with his booger? Well, he won't have boogers, a nose, an arm or feet to chase you with ever again after Hit-Girl is done with him."

"It's been almost two and a half weeks since me and my ex-best friend, Rowley Jefferson, had our big fight.  To be honest with you, I thought he would've come crawling back to me by now, but for some reason, that hasn't happened.
I'm actually starting to get a little concerned, because school starts back up in a few days, and if we're gonna get this friendship back on track, something needs to happen quick" (p. 1).

"So, it's only been a few days without Mom, and things are already starting to fall apart.  We've got one serious injury so far, and who knows what's in store down the road" (p. 60).

And one of my favorite images: 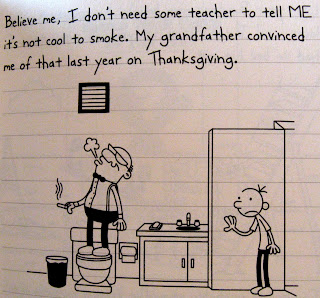