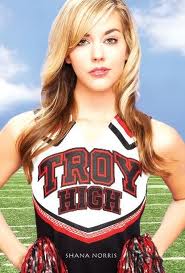 
Appetizer:  In this modern retelling of The Iliad, sophomore Cassie Prince has always been in the shadows of her popular, football playing brothers, Hunter and Perry at Troy High.  She's in-like with her best friend Greg (a student at the rival high school, Lacede) and wants to be popular.

When the beautiful girlfriend of Greg's older brother, Elena Argos, has to transfer from Lacede to Troy due to redistricting, knowing Elena could be Cassie's one chance to become popular.  All she has to do is lie for Elena and help her to win Perry's affections.

But when Elena doesn't handle her break-up with her Lacede boyfriend in the best way possible, what has been a school rivalry for 50 years turns into all out warfare that Cassie fears will lead to ruin.

I was really surprised how easily the plot of The Iliad leant itself to teenage drama, especially when focusing on the romantic entanglements.  That was pretty awesome.

While I found the book enjoyable, I wasn't blown away by it.  I thought the writing was so-so (especially when compared to the oral epic it is based upon) and when Norris tried to use metaphors of warriors to describe the football players, it felt very forced.  (Plus, there were several pages of intense football description, which made me tilt my head to a side and ask, "Say, what's happenin' now?").

Nothing about Cassie's character or voice really impressed me.  (But given the fact that she was based on Cassandra the seer, living up to the expectation was difficult.)  I did find a few of her interactions with Greg to be cute (see the last quotation in the dinner conversation for an example).

Elena/Helen was annoying (but she often is) and Achilles/Ackley is barely memorable.

I also thought the ending was a little too quick for me.  I won't give spoilers, but some people were too quick to forgive some incidents and other people remained unpunished for other incidents.  I did not likey.

On the plus side, the book did make me want to reread The Iliad.  Or watch Troy (Brad Pitt!).  Whichever. 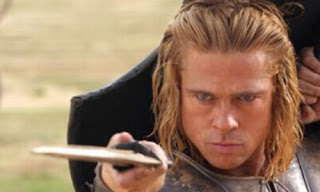 "It was a late Sunday afternoon when I kissed my best friend.
We had been playing our favorite video game, Martial Battle 2, in his parents' den.  Playing video games was something we did a lot.  Kissing was not" (p. 1).

"So, tomorrow's the big day," he said as he selected his next fighter.  "We go back to being enemies again."
I rolled my eyes.  "I can hardly wait."
Every school had a bit of a rivalry with other schools, but the one between Lacede High and Troy High was legendary.  It made sense, I suppose, that our mascots were the Spartans and Trojans, respectively.  Just as the Greeks and Trojans battled thousands of years ago, our schools fought wars on the football field" (p. 2).

"The second reason the rivalry had grown so huge this year was that over the summer the board of education had redrawn the school district lines to help ease overcrowding at Lacede.  Which meant that some of the Lacede students would now be attending Troy High, starting tomorrow.
And the most beautiful girl at Lacede, Elena Argos, was one of those students" (p. 9).

"You haven't broken up with Lucas?  But I thought you were so crazy over Perry?"
"I am," Elena said.  "I'm going to break up with Lucas before I go out with Perry.  I promise.  Don't worry, Cassie, I'll treat your brother right.
It wasn't my brother I was worried about" (p. 52).

"Tell your brother that he has no idea what he's started.  Steal from me, and you have to deal with every Spartan wanting revenge" (p. 69).

"Who's going to make sure you get back home okay then?" I asked.
Greg puffed out his chest.  "I can take care of myself."
"And I can't?" I asked.  "What do you think I am, some defenseless little girl?"
"Sorry," Greg said, rolling his eyes.  "I didn't mean to offend you.  What I meant to say was, let me ride home with you so that I can protect innocent pedestrians from making the mistake of thinking that they could easily overpower a ninja disguised as a five-foot-tall, one-hundred-pound girl" (pp. 144-145).